Add warm dimensionality and luscious tape saturation to your signal. Teleport the tones of yesteryear to your board. Effortlessly create a huge range of beautiful, distinctive, and enveloping vintage sounds.

Our journey begins with the early recording studios of the ’50s and ’60s. The introduction of reel-to-reel tape machines and the creative engineers that used them brought on some of the fattest sounds imaginable. These early machines really were the first effects pedals — they just wouldn’t have fit on your pedalboard! From the inherent warmth and luscious tape saturation to the forgotten art of how these machines were manipulated, Deco brings this original inspiration back, giving you these vintage tape effects from the earliest recording studios, right on your pedalboard.

Deco’s Tape Saturation smooths out your sound with familiar and delicious tape compression and saturation, while fattening your tone with subtle tape-driven transparent overdrive.

The Doubletracker provides the power to shift your sound in many ways, easily allowing you to achieve syrupy slapback tape echoes, psychedelic tape flanging, and gorgeous tape chorusing sounds.

Our second generation Deco gives you the same gorgeous reel-to-reel tape sounds from our original, while adding several significant new features, incorporating technological advancements, hardware improvements and design enhancements to give you additional flexibility, power, and ease of use on stage and in the studio.

Full MIDI implementation means you can control just about every switch, knob, and setting remotely by sending MIDI commands from your controller or DAW via Deco’s EXP/MIDI jack or USB-C connection.

Lag Deck delay time can be synchronized via MIDI Clock Sync, and the sync setting can be saved for each preset. In addition, a new dedicated Tone knob lets you adjust the tone of the Tape Saturation exactly to your liking, from dark to bright. 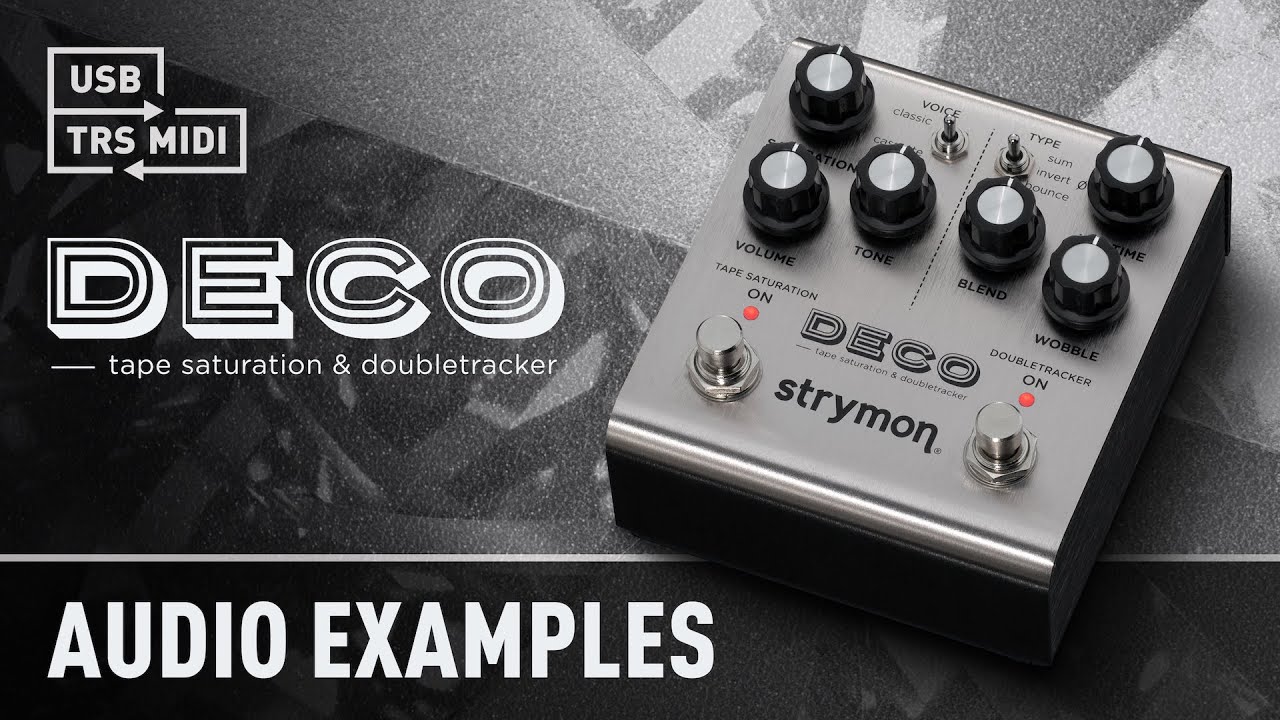 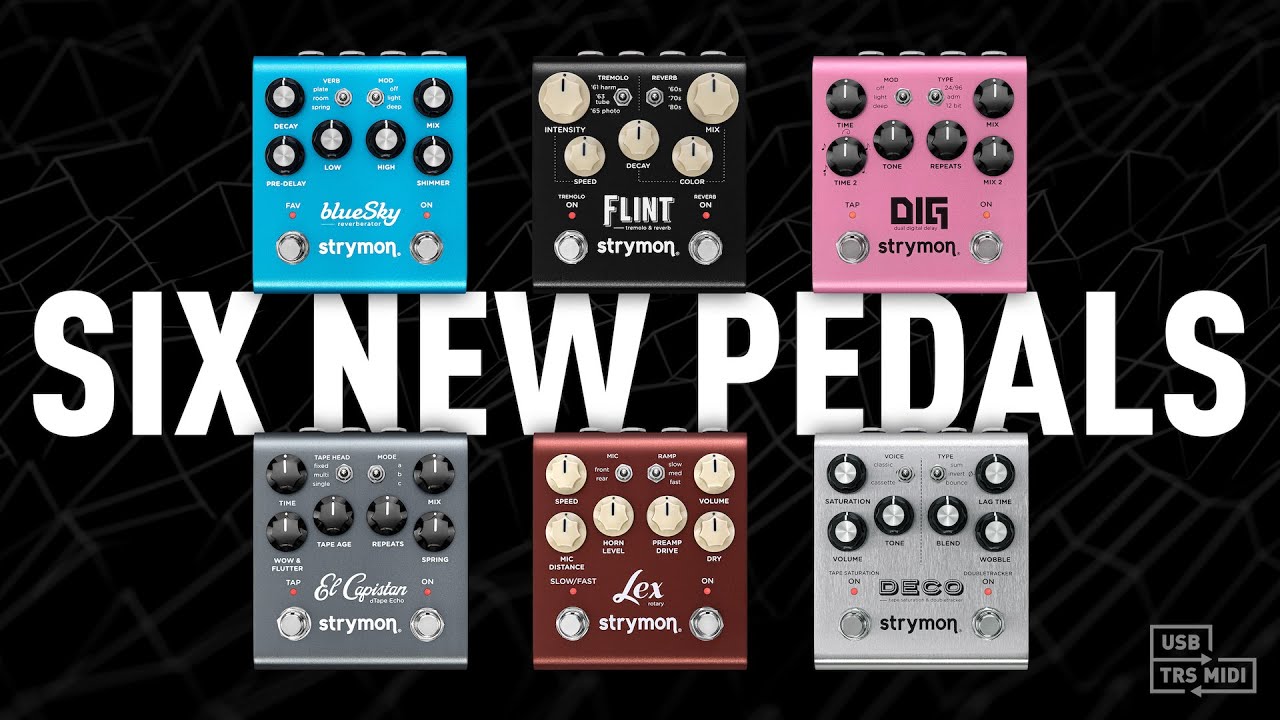 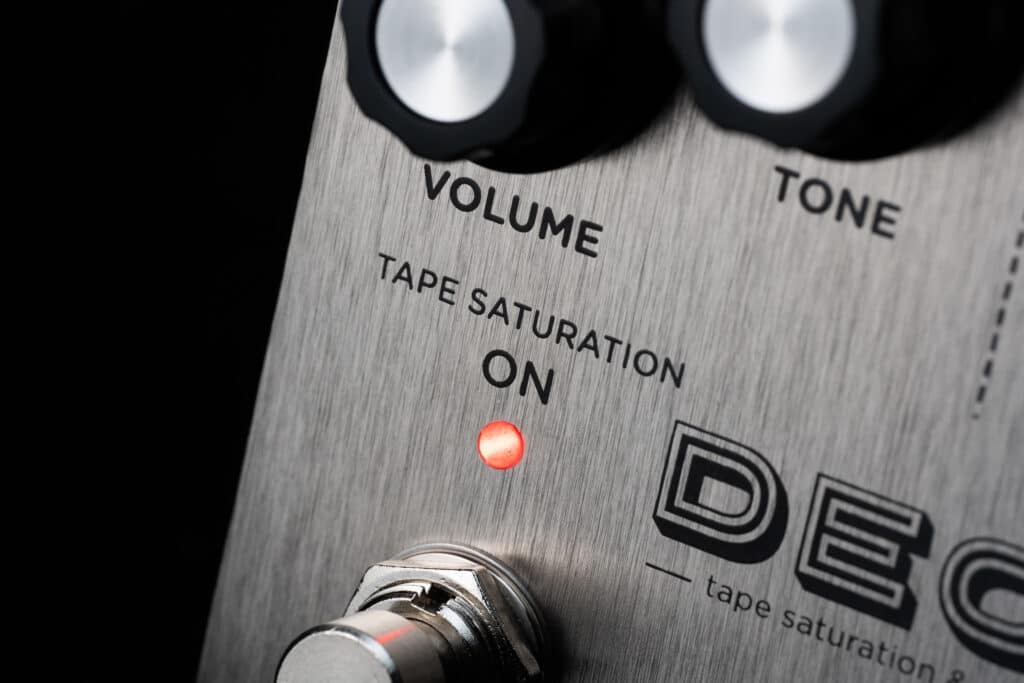 Give your sound the smooth and warm qualities of analog tape, along with the enhanced touch sensitivity and playing dynamics that are intrinsic to the inner workings of tape machines. Achieve incredible transparency at low levels, with reduced high frequency spikes and a harmonically rich low end. Turn up the Saturation to increase the amount of tape drive, dynamic compression and distortion. Deco is perfectly suited for a last-in-chain, “always on” sweetening effect. Everything sounds better on tape. Want to push the limits of tape beyond what was originally possible? Use Deco as a tape-style transparent overdrive—crank the Saturation all the way up to “peg the meters” and gently overload the machine’s input.
Tape Saturation Controls
Tonal Control.

Deco’s Tape Saturation side features controls for dialing in everything from light, transparent saturation all the way to smooth, overdriven tape distortion. The Saturation knob allows for a wide range of tones that range from subtle saturation and compression at lower levels, to transparent tape overdrive at its upper limits. An adjustable Volume control for Deco’s Tape Saturation lets you raise the output volume when using Deco as a boost, or dial it back to achieve unity gain. Our new generation of Deco features a dedicated Tone knob that lets you adjust the tone of your Tape Saturation, from darker to brighter. The new generation of Deco also introduces a Voice switch for an expanded range of available sounds. The Voice switch has two settings: classic: produces the response and saturation characteristics of 2-track mastering reel to reel tape machines. cassette: employs an auto level control (ALC) process common to many high-end cassette tape recorders, resulting in a musically compressed, fat tone and a great-feeling response.
Doubletracker
Double Or Nothing. Go back to the early days of recording studios, where a few creative audio engineers discovered a new world of augmented sound by pushing the limits of studio tape machines. By inventing automatic doubletracking, they introduced echo, flanging, and chorus to the world of recorded music. Intensify and widen your sound with Deco’s Doubletracker controls. Turn the Lag Time to obtain classic slapback tape echo, spacious doubletrack chorusing, and mind-bending tape flanging. Add random modulation with the Wobble control and go from very subtle movement to more extreme undulations—just like having a recording engineer vary the speed of the machine. Add warm dimensionality and luscious tape saturation to your signal. Teleport the tones of yesteryear to your board. Deco is a jack of all trades capable of creating a huge range of beautiful, distinctive, and enveloping vintage sounds.
Doubletracker Controls
Full Control. In addition to Lag Time, Deco’s Doubletracker features additional controls to help you achieve a wide variety of tape based effects. The Blend control sets the mix level between Deco’s Lag Deck and Reference Deck, and can be lowered to hear more of the Reference Deck for less doubletracking, or raised if you want to hear more of the doubletracking effect. Deco’s Wobble knob adds random tape speed based modulations to the Lag Deck. Go from very subtle movement to more extreme undulations — just like having a recording engineer vary the speed of the machine. Wobble is super handy to increase the depth of the modulation effect you hear when Lag Time is set to act as a tape flanger/chorus, or use it to add modulation to the Lag Deck when set as a slapback or tape echo.
Blend Type
Not Just A Phase. Simply by turning Deco’s Lag Time knob, you can unlock a whole variety of organic, tape based modulation and delay effects.  When adjusting the delay offset between Deco’s reference deck and the Lag Deck with the Lag Time knob, you can achieve everything from tape flanging at lower settings (-.3 to 3ms), increase that a bit for lush tape chorusing (3 to 50ms), followed by snappy slapback delay at longer delay times (50 to 150ms), all the way to spaced out tape echoes (150 to 500ms).
Wide Stereo
Stereo To The Max. 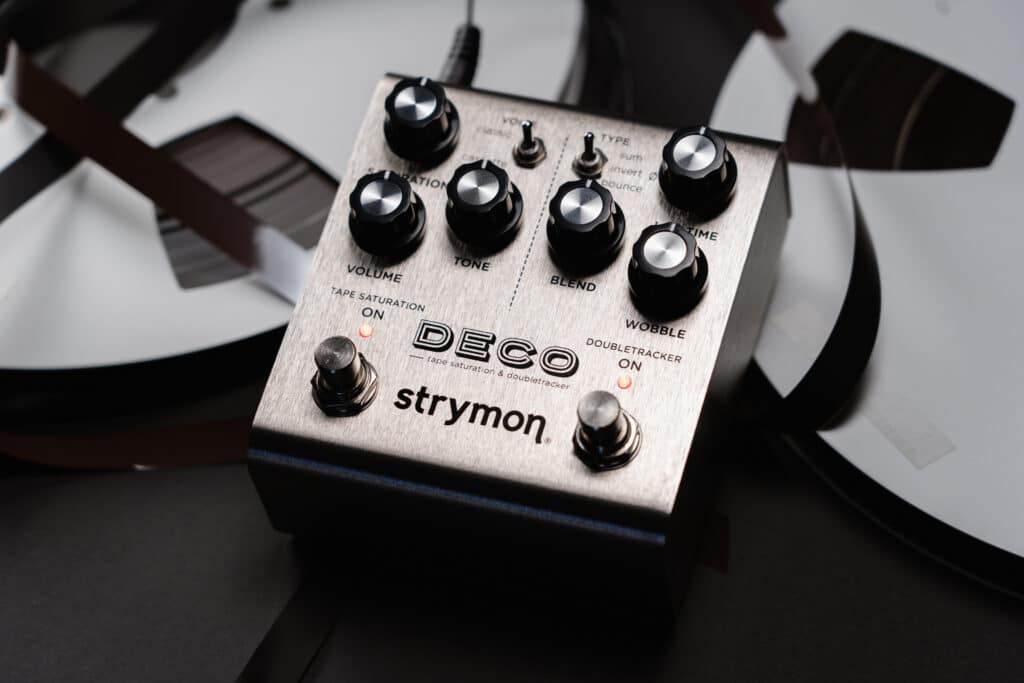 Deco gives you the option for extremely wide stereo imaging to broaden and intensify the sound of your stereo rig. Wide Stereo Mode sends the mono input (summed if using a stereo input) to the Left channel through the Reference Deck, and to the right channel via the delayed Lag Deck to create an adjustable stereo spread. The Blend control acts like a pan control by adjusting the relative levels of the two tape decks.
Auto-Flange
Your Personal Engineer. 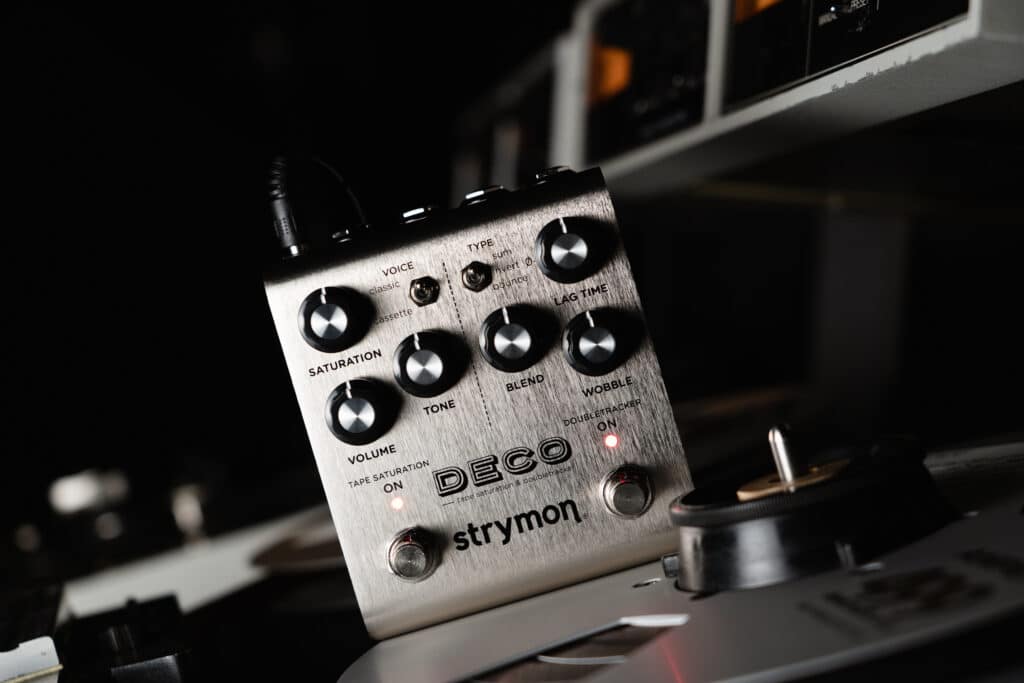 Press and hold the Doubletracker On footswitch to achieve a recording studio-inspired through-zero flange effect. This engages a “virtual audio engineer” manning the faders and tape reels to create a smooth and predictable through-zero flange experience on the fly. After releasing the footswitch, the controls are smoothly returned to their previous settings.

Our new generation of Deco features full MIDI implementation, allowing you to control just about every switch, knob, and setting remotely by sending MIDI commands from your controller or DAW via Deco EXP/MIDI jack or USB-C connection. Lag Time can be synchronized via MIDI Clock Sync, and the sync setting can be saved for each preset. 300 MIDI preset locations are available for loading and saving your favorite settings. Remotely bypass or engage the pedal, sync Lag Time changes along with your tracks, automate knob adjustments, recall unique presets for each song on your setlist — the possibilities with MIDI are limitless.
True/Buffered Bypass
Choose Your Bypass Mode. Deco lets you choose electromechanical relay switched true bypass for a 100% untouched, unprocessed signal when the pedal is bypassed (this is the default setting), or you can opt for our premium quality buffered bypass that conditions your signal to preserve its integrity by preventing the high end roll-off that can happen due to longer cable runs.
JFET Input
Analog Touch. No need to make compromises when it comes to signal routing or pedal placement — Deco features full stereo in/out capabilities. A single TRS input jack allows Deco to keep its compact form factor while giving you the option to use a stereo input signal. A dedicated rear panel Input switch allows you to easily set Deco for operation with a stereo (TRS) or mono (standard TS) input source. Low impedance dual TS output jacks let you use Deco as a stereo effect.
Studio Mode
On Another Level. Pedals aren’t just for guitarists. Deco’s Studio Mode makes it a versatile tool for endless applications from the studio to the stage. By setting Deco to Studio Mode, you get 10dB of added headroom, allowing you to use Deco with bass guitars with active pickups, synthesizers, keyboards, effects loops, and more.
ARM Processor
Power To The Pedal. Significant developments in mobile phones and computers have led to an evolution in technology that now allows our pedals to perform more simultaneous processes with less power draw than ever before. That means more processing power for every sonic nuance with less power consumption on your pedal board.

Hover over the interactive dots to learn more about Deco’s knobs, switches, and inputs/outputs.

Tap on the interactive buttons (+) to learn more about Deco’s knobs, switches, and inputs/outputs. Adjusts the overall tone of the Tape Saturation, from dark to bright.

Controls the output volume of the Tape Saturation.

Sets the amount of tape drive, dynamic compression, and distortion.

Sets the delay offset between the two decks.

sum: decks are in phase

Engages the Doubletracker. Hold to engage the instant Auto-Flange feature. Use Out L for mono output.

Use Out L and Out R for stereo output.