Taking a Look at the Fender Guitars of Strymon Demos 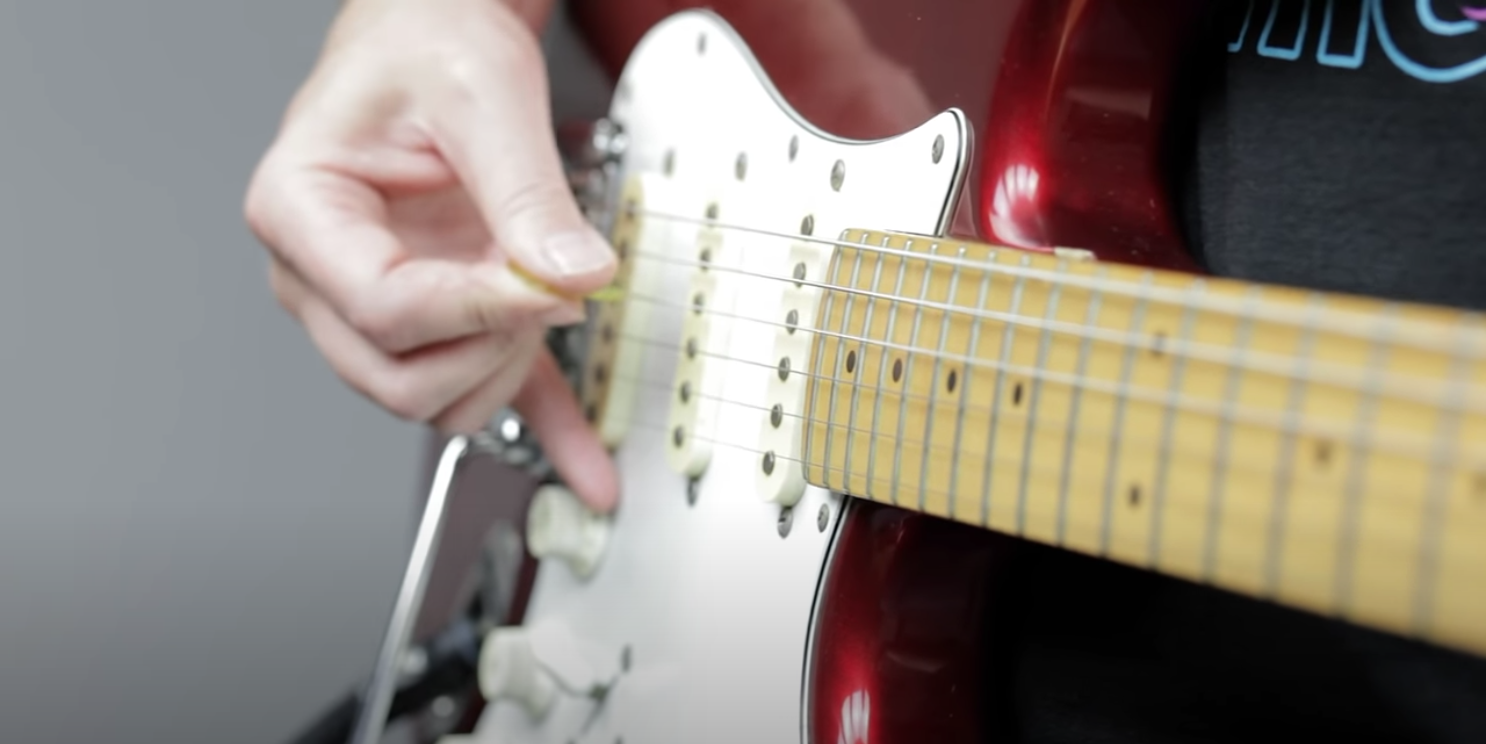 So we will start there…

Ethan what do you enjoy most about using your Fender Toronado for demo videos? Tell us a little bit about the history of your Toronado.

I love playing guitar, and I adore making music with guitars, but I’m in no way a guitar aficionado. I don’t have much interest in what wood a guitar is made out of or what brand name the pickups are. Those things are certainly important to some, but they don’t register very high in my actual enjoyment of an instrument. Close your eyes or put a piece of tape over the brand name on the headstock and ask yourself: how does it feel and how does it sound?

My built in Mexico, mid-’90s Fender Toronado was purchased for $250 at a terrible Los Angeles music shop back in 1999. It’s been my primary guitar ever since. I enjoy using my Toronado for Strymon demos because it’s easy to play, it sounds great, it’s comfortable, and ultimately it’s just very familiar. I’ve actually sold off most of my guitars and this is essentially the last guitar standing! There isn’t much about my Toronado that makes it notably better than any other guitar—build quality is acceptable, it’s not the prettiest thing, and it’s certainly not that valuable. But after using it on so many recordings over such a long period of time, it has enough sentimental value that I just can’t imagine ever getting rid of it. 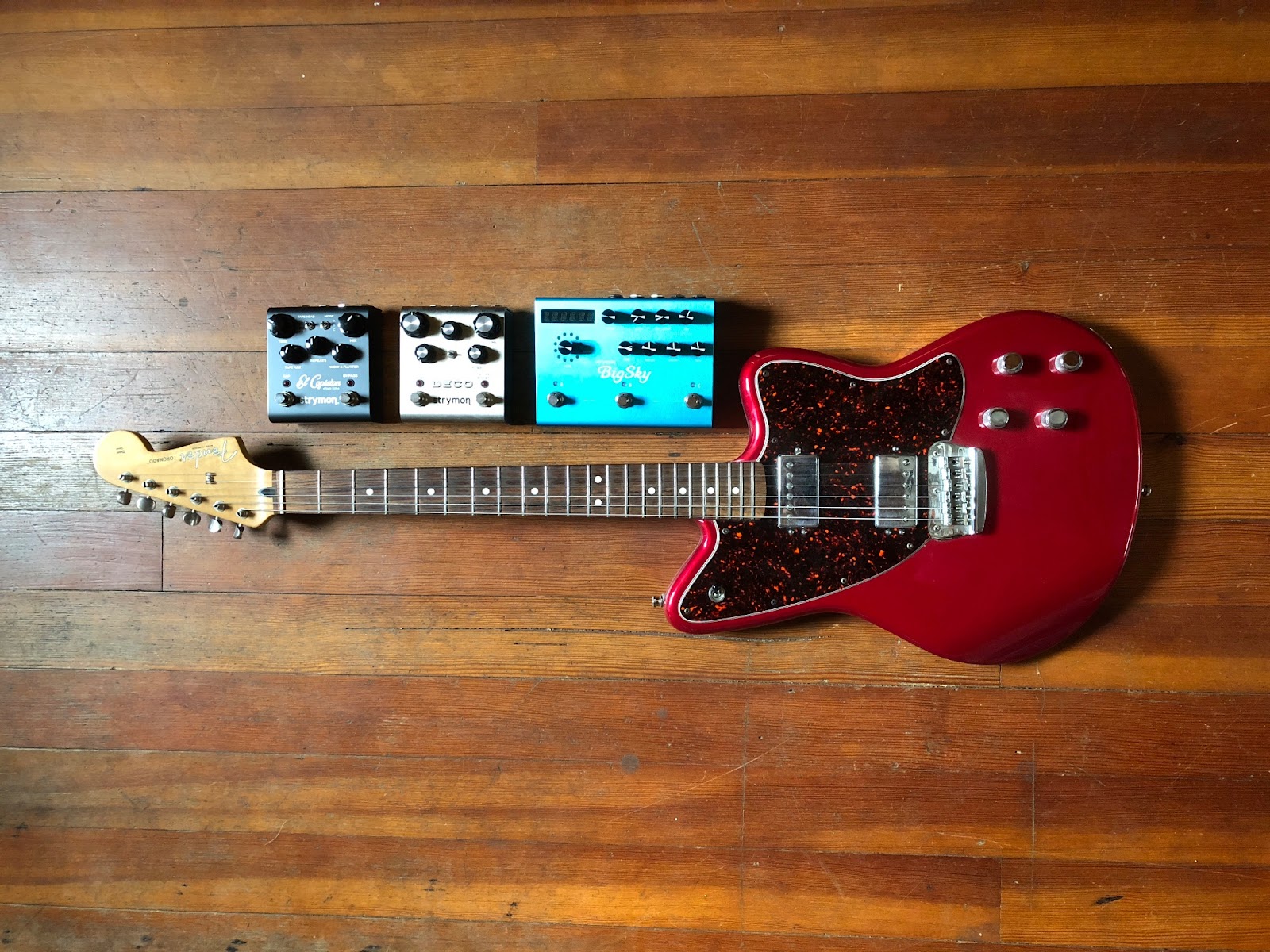 Can you give us the Toronado specs?

After working at Strymon for over 11 years you’d think by now I’d know a bit more about guitar specs or construction, but I don’t! I guess I’ve spent too much time noodling with pedals. Given that, I have no idea what the scale length is. It does have a rosewood fingerboard with a really nice feel. Also present are the original Fender humbucker pickups which sound lovely. I’ve never had the guitar set up, and haven’t even opened it up to replace or repair any wiring or switches. It has just worked.

Many of our viewers always notice that you often play in DADGAD. Why do you lean towards that tuning?

My approach to guitar has always been that it is an appliance that serves my songwriting. I consider myself a songwriter first, and a musician second. While I do endeavor to become a better player, the song is always paramount, and I try to focus my playing on building a great song. Since most of my time is spent on the songwriting side of things, I haven’t allocated much time in my life to actually practice guitar! I’ve never taken lessons, and have just never been all that comfortable with traditional techniques. And that includes traditional tunings.

DADGAD was one of the first non-standard tunings that I tried, and it just stuck with me. DADGAD has long felt more natural to me than standard tuning, to the point where DADGAD is now pretty much MY standard tuning! Since I lack some of the fundamental guitar techniques that most decent guitarists take for granted, I tend to rely quite a bit on memorizing shapes and patterns on the fretboard. A fair amount of the time I have no idea what chord I’m playing unless I dissect it by tracing the notes out on a piano. This is absolutely and unequivocally a terrible way to approach guitar, but my method of playing guitar really melds nicely with DADGAD.

I know this is going to sound crazy, but I just happen to enjoy those fretboard shapes and patterns better with DADGAD. It helps that it sounds pretty decent as all open strings—so there seem to be a lot of opportunities for lovely sounding chords that leave some strings open. I also enjoy experimenting with other weird tunings to see if it inspires a new way of playing, or some new songwriting fodder. A favorite right now is B F# B F# G# C#. But I don’t see myself ever giving up DADGAD. It’s in my blood.

Of course as you could guess, many of the demo videos that feature Fender are also featuring Pete Celi. So let’s here from Pete about his Fenders.

Pete please tell us about the Fender guitars you own and use in many of the Strymon demo videos.

This guitar has a long history that has its origin in an original 1969 butterscotch Telecaster. I got it in high school in 1980 and immediately started to mod it. I changed pickups, added more pickups, repainted it a number of times, changed the neck, and finally replaced the body itself because I had mangled it so badly. At this point nothing of the original is left. But it is a nice guitar. Very well balance tonally with some Gibson mini humbuckers and a Joe Barden pickup from the 90s in bridge. I would trade it in an instant for an original 1969 Telecaster. 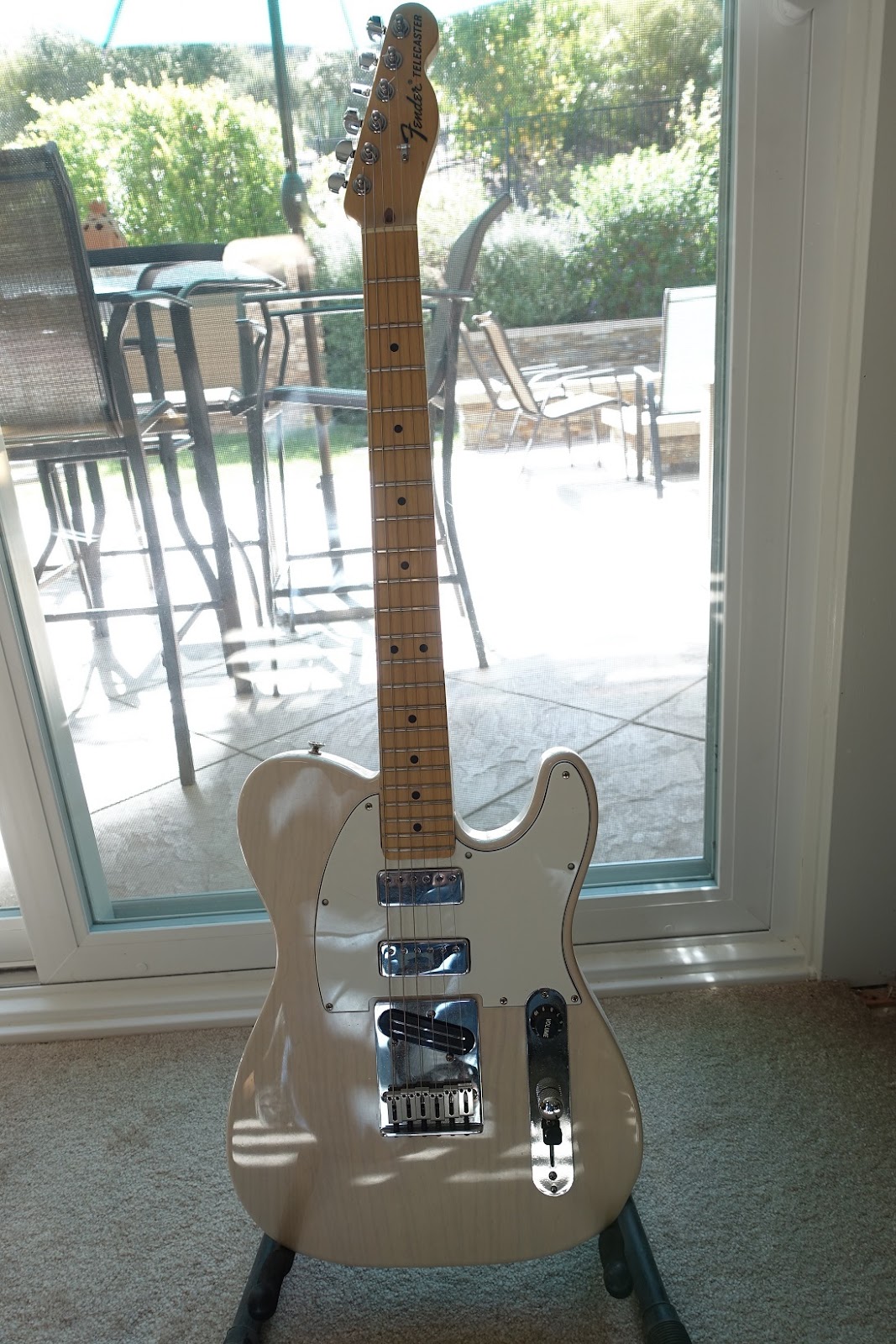 This is another project guitar where I paired a 50’s Classic Strat body with a Fender Special Edition 60th Anniversary Strat neck with a headstock painted Daphne Blue. I have changed pickups a number of times and it currently has Fender Tex Mex Strat pickups installed. When I put it together the body and headstock color matched perfectly, but now the headstock is a nice aqua blue from the yellowing of the lacquer finish but the body is still ‘new’ looking due to its poly finish. It’s kind of a color-based timepiece. 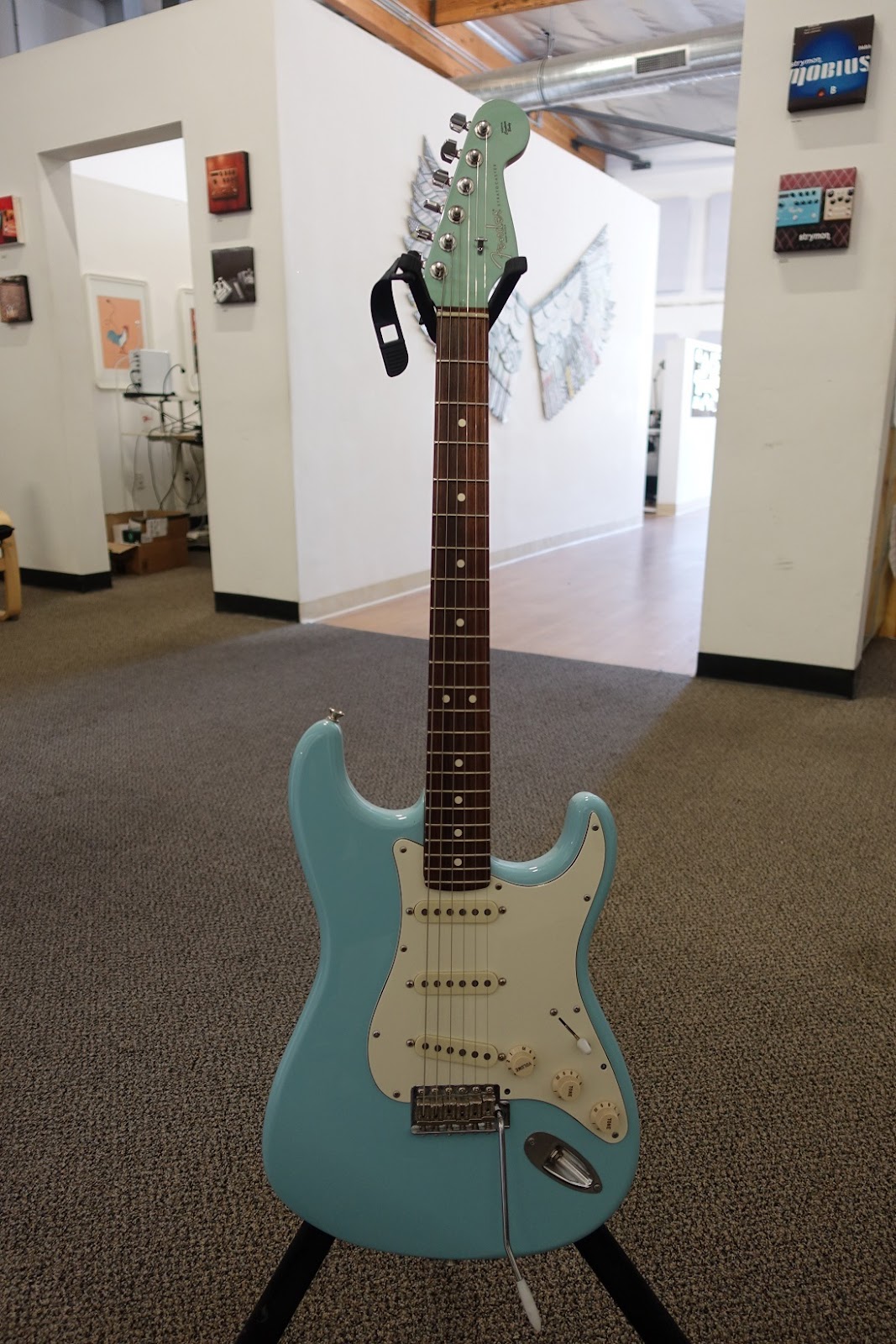 This is a rarity for me – a stock Fender guitar with no modifications. It is a Classic Player Jazzmaster from around 2012. It plays great and sounds great. The tailpiece is a bit closer to the bridge and the saddles are tune-o-matic style so that the strings won’t pop off the saddles when you get aggressive like the vintage Jazzmasters have a tendency to do.  Also the pickups are a bit beefier and sound great, and the frets are medium jumbo. I wouldn’t change a thing about it! 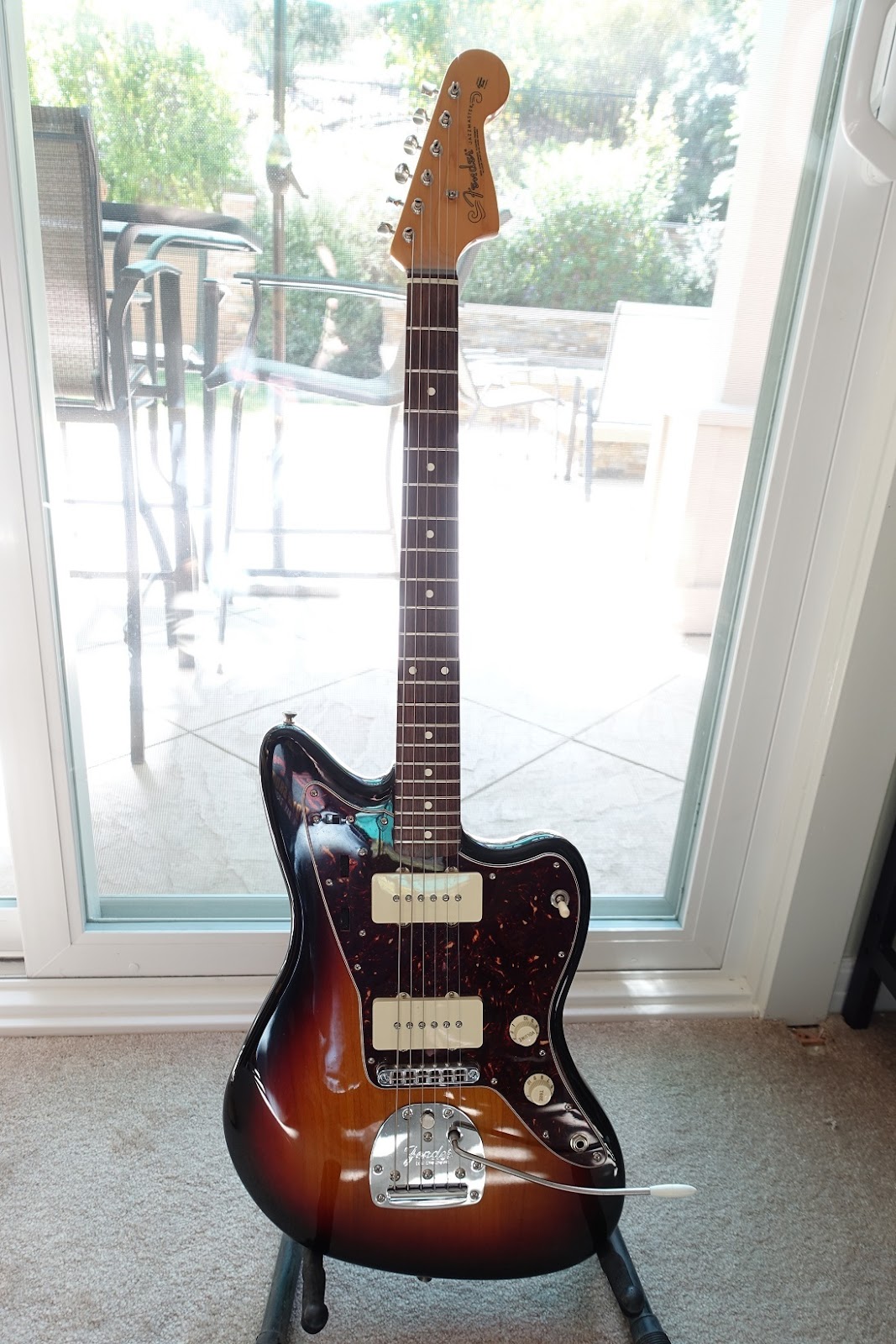 Matt tell us about your 1985 Fender Stratocaster. What has made you pick up this guitar for some of your Strymon demos?

I do a lot of demos with my 2008 Gibson Les Paul, which is kind of my main electric, but in order to maintain balance in the Force, I like to play that Strat for some demos, and I love the guitar. The neck feels great, and the pickups just really give me what I consider to be a classic Strat sound. I think the neck pickup sounds just beautiful, and I like the #2 and #4 positions on the five-way pickup selector switch as well. The bridge pickup is also delightfully nasty with the right amp and settings (not just an icepick but actually usable). My favorite demo that I’ve made using this guitar is the Volante Sound on Sound Examples video.

So is this an American Strat?

No, this guitar was actually made in Japan. The one thing that stands out as different from American Strats is the oddball tremolo system (which works just fine in my opinion). It originally had string locks behind the nut, but more than twenty years ago I took them off (because I had trouble keeping them tight), and then I LOST them! I have hoarder tendencies and hardly ever lose a part like that, but I did in this case. But the tremolo is fairly stable anyway and the string tree I put on works well for keeping the high E string from slipping off the nut. Also, I’ll never sell the guitar, so I guess it’s ok that the string locks I didn’t like are MIA.

Do you have a fun story about your Stratocaster?

Yes, and it explains why I will never sell the guitar (besides that I just find it to be a great guitar). When I first moved to Los Angeles at the age of 19, the first job I got was at a pawn shop in Hollywood. I worked there for years, and became close friends with my coworkers. One day a couple of months before my 22nd birthday, I arrived at the shop for work in the morning, and this beautiful candy apple red Strat was hanging on display. I played it and just fell in love with it. Then one day I came into work and it was gone. I was disappointed that it had been sold, because I really had wanted it and wished I’d tried to buy it. A couple of months later my birthday came around and my friends threw a huge party for me at a big house in the Valley with a great backyard, pool, and jacuzzi. It was a super fun backyard party that I still have vivid memories of. I totally wasn’t expecting any presents, but was suddenly surprised to be presented with a hardshell Fender guitar case! I opened it up and saw that red Strat, and was told afterward that I “screamed like a teenage girl” at that moment. Two coworkers who lived in that house had seen me totally loving playing that guitar in the pawn shop, and together with one coworker’s wife (who owned the house) they had put it on layaway and bought it for me. It was the nicest gift anyone has ever given to me.

What string gauge do you use on the Strat?

For the longest time, I used 10s on the Les Paul and 9s on the Strat. But then I brought the Strat to Strymon and was immediately met with universal condemnation from my coworkers (including Pete Celi) for having 9s on that guitar, so now I use the same standard 10-46 set on all my electrics. Peer pressure at work! They were right. I like the sound of the 10s better now on the Strat.

And last but not least is the Fender Telecaster that is featured by Hugo Merida in the Strymon Iridium demo. Let’s ask Hugo about his Telecaster.

Hugo can you tell us about your Fender Telecaster.

It is a 2002 Mexican made Standard Telecaster with some mods: GFS Alnico Staggered neck pickup, Seymour Duncan Broadcaster bridge pickup. 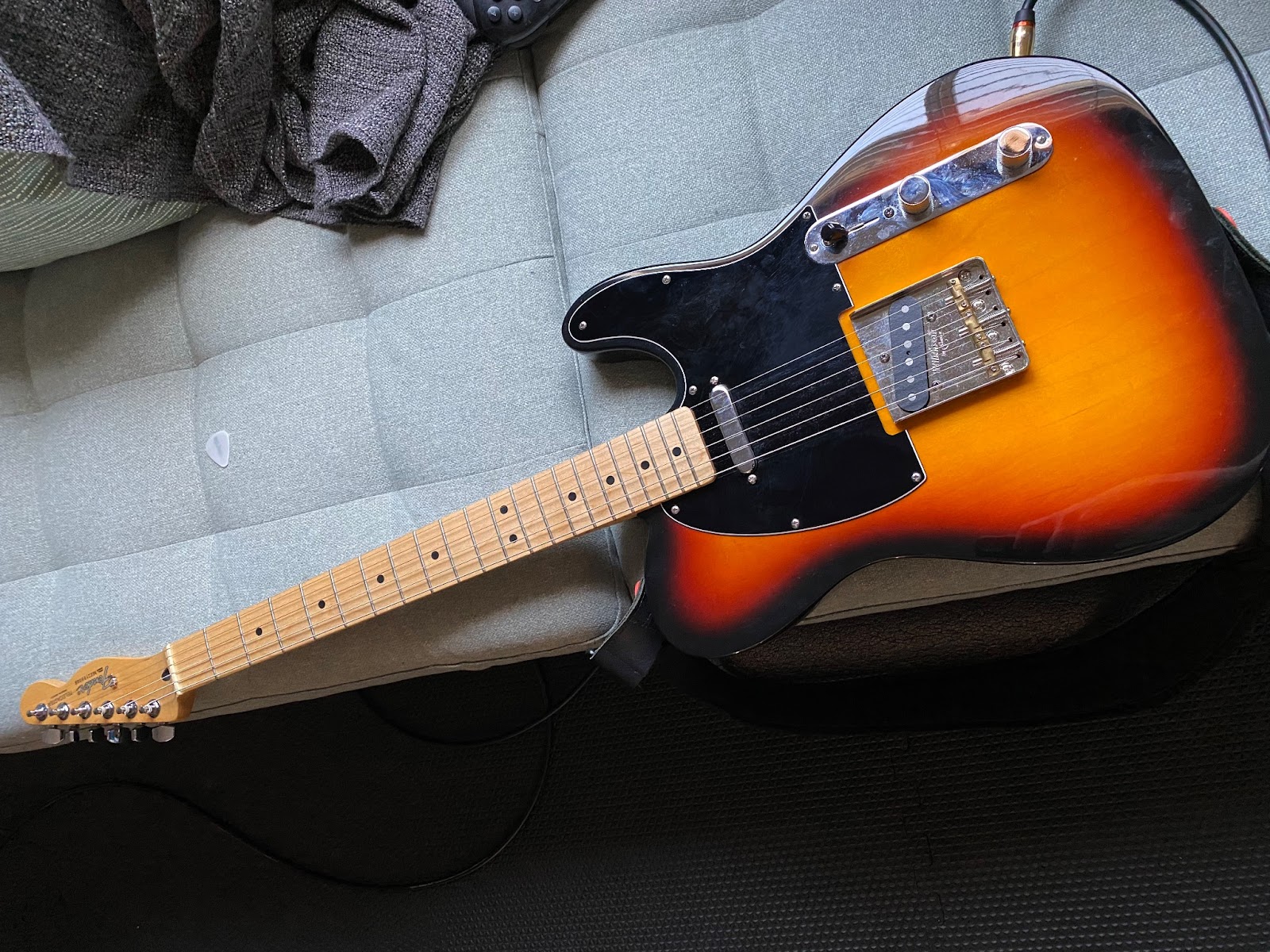 What has made you pick up this guitar for some of your Strymon demos?

I chose the Tele because it has a particular tone to it that my other guitars don’t have.  The bridge pickup has a bite and snarl that I was not accustomed to from my previous experience with single coils (strats) and the neck pickup has a very clear ‘woody’ tone to it that works well with clean or slightly dirty, high-headroom amps.

Do you have a fun story about your Telecaster?

This is the first Telecaster I have ever owned, purchase just a few months before I used it in any of our demos.  I was always a Stratocaster player and was hesitant to check out Telecasters until I heard Pete singing their praises.  I haven’t really touched my Strats since.

Here are few more of our demos featuring Fender guitars: