Nicholas Semrad keeps busy playing as much music as possible. Which sounds great to us. Nicholas tours with Lauryn Hill, performs and records with Cory Henry & the Funk Apostles, and finds time to jam with “The Lesson” at Brooklyn Bowl. Learn more about all of these musical activities and about Nicholas below. Let’s start with synths! Hanging out on your Instagram it looks like you have quite the collection of synths. Can you tell us a bit more about what is in your collection?

Before I moved from Nebraska to NYC a few years ago, I had been a vintage board collector. I had to downsize when I moved, but I currently have a Dave Smith Prophet 08, a Nord Stage 2 EX, a Moog Sub 37, 2 Wurlitzers and a Hammond B3…..oh, and an Omnichord (if that counts).

You played with Lauryn Hill and used a Wurlitzer with BigSky. Please tell us more about that. One of us here has that same combination 😉

Yeah, the Wurly-BigSky combo was really amazing. Ms. Hill is really into dreamy soundscapey stuff, but I was just playing Hammond and Wurly on the gig (not synth), so I kind of used the BigSky cloud verbs to make everything as dreamy as possible.

What are other ways you combine your pedals with your synths?

Oh man….where do I start? I guess most of my main gigs lately other than Ms. Hill have been featuring me doing synth work (especially the work with Cory Henry and the Funk Apostles). On my board currently are 3 different delay pedals (4 if you include the Earthquaker Devices “Rainbow Machine”), but I really only use the TimeLine for actual delay. The Moog MF Delay is mainly used for it’s drive feature, as it really warms everything up. I’ve been mainly using the Strymon DIG delay for some rhythmic tricks….if you use the ADM delay and turn the repeats knob all the way “off” and leave both mixes almost all the way to the right, you get this really percussive fast 4 hits in a row…..super cool effect when you combine it with some of the stuff on the Mobius or, and this is my favorite, the Chorale verb on the BigSky. It almost sounds like a choir singing fast latin-isn stuff if you time it right!

Another really great thing that this pedalboard lets me do that I find very unique is some live side-chain-compression effects. I use a combo of the Alesis 3630 rack mount compressor with a Boss HC-2 HandClapper hooked up to the sidechain input on the back (not really pictured on the board, as I set it on the floor)……..I can set the threshold really low and trigger compression just by tapping the pedal with my foot. This effect is obviously great for EDM and electronic music stuff, but it also gives me the ability on my hip-hop gigs to combine with the Destroyer setting on the Mobius and give a Wurly/Rhodes/Piano the feel of a Dilla/Knxwledge/messed-up-vinyl kind of thing. It’s really unique, and really cool…. You have been doing a residency at Brooklyn Bowl with “The Lesson.” What are some important tips with improv and playing with guests that you haven’t played with before?

We’ve been doing “The Lesson” in NYC (which is an amazing all-improvised hip-hop jam session) for almost 4 years now, and the best moments always come when people play for the song and for the moment rather than trying to play to impress someone. There are times when you should show off…..but if that’s the first thing that you’re thinking about when you get on stage or anywhere you’re playing music, odds are that the music is going to suffer.

We are strong supporters of music in school. You have taught some Electronic Music classes to high school kids. What is something that you learned from those classes?

I learned that kids actually have really great opinions on music if you actually discuss it with them. My friend Avishai and I have taught a few classes in our spare time when we’re home from our respective tours, and the discussions that we had with these young kids were really phenomenal. They were actually giving us artists that we hadn’t heard of (and vice versa) and we were doing our best to dispel the notion that it takes a ton of money to make great music. We spoke to these kids about how some of the earliest sampling and hip-hop records were made with gear that you can probably find in a pawn shop for little-to-no-money……it gave a lot of these kids hope that they could actually do music for a career, and it was one of the greatest feelings ever.

What are some of your plans for the near future?

I’m currently finishing up the Cory Henry & the Funk Apostles record here in Brooklyn, and in the next few months we’ll be doing a number of 1-2 week east coast runs….we’re also doing a two-and-a-half-week European tour in November before hitting February-April pretty crazily. I’ll also be out on the road for a good portion of October with an artist that I can’t make public yet, but I’ll let y’all know on Instagram/Twitter/Facebook the second she allows me to =) 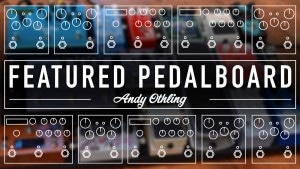