Stanton Edward is a guitarist and producer who has worked with several artists including The Wallflowers, KS Rhoads, Missy Higgins and more. When Stanton isn’t on tour he enjoys being back home working on music in Nashville, TN.

This is a Pedaltrain 2 that has been customized by XTS (Xact Tone Solutions) in Nashville. I had them flatten out the top and put in a custom interface that allows me to send isolated lines to 2 amps. They also put in a phase reversal switch on one of the outputs in case I run into a phase issue between the two amps. Another cool option they included for me was an insert that will allow me to pop in extra pedals after my drive section in case I pick up something cool on the road and want to throw it on my board without ripping up cables and pedals.

My signal path is constantly changing – I typically setup a new board and amp configuration for each different gig I play to really capture the vibe and feel of the artist. Lately I’ve been touring with The Wallflowers and my signal path is as follows: Can you share a bit on how you have been using your Strymon Lex?

What a great pedal. When I was looking for a leslie pedal the main factor I’d consider is the quality of the “low” speed. This is where a lot of pedals miss the mark. I’ve played through a ton of real leslie cabs and to me, the Lex sounds closer to the real thing than anything else out there. I’ve also got to brag on the Flint. I’m a tremolo and reverb nut. I typically play through old Gibson & Fender combos in the studio but can’t always bring them to a gig. I threw a Flint on my board about a year ago and I find myself using it more and more, even when I’m playing my vintage amps in the studio.

You recently did a cover of The Beatles “Tomorrow Never Knows.” How has John Lennon and The Beatles influences you as a musician?

I mean, it’s John Lennon… What can I say that hasn’t been said a million times before? What an unbelievable creative individual he was. The Beatles are my “desert island” band for sure. There’s just so much variety. I’ve always loved their weirder, more experimental stuff and “Tomorrow Never Knows” is no exception. I love George Harrison’s playing on that track and I was really trying to capture that cutting lead tone on the solos. The main thing I take away from listening to The Beatles’ records is that they wouldn’t get in a hurry to churn something out. So much that happens on their tracks is so deliberate, creative and thoughtful while still retaining a raw, exciting feel. I try to keep a healthy balance of those two elements when I play. To me, great music is 50% brains and 50% guts.

Nashville is known for it’s great music scene. Can you share a bit about your musical adventures in Nashville? And for a newbie in Nashville where is the first place they should go for an evening of music?

Simple. Watch Mike Henderson on Monday nights at The Bluebird Cafe. I’ve been going to see him since I moved to town 11 years ago. Mike will show you that playing guitar is ALL in your hands, not your gear. His touch on the guitar is beyond words.

Do you have any bits of advice you could give for a band going into the recording studio for the first time?

All of my favorite artists strike a healthy balance of playing from their brain and playing from their guts. To me, that’s what it’s all about. Take the time before going into the studio to really practice and hone your skills. One thing I really hate to hear from guitar players is the classic line “I don’t practice because I want to play from the heart in the moment”. To me, this is such a misguided approach. You want to get your hands in a place where they’re ready for anything your brain can throw at them in the moment. Doing this will give you the freedom to explore new areas in a live situation and will get you out of the rut of playing your tired old “go-to” riffs and licks.

Listen to your favorite players, steal riffs and techniques from them and incorporate them into your playing. Learn the fretboard. Can’t stress that enough. Practice your scales & modes. Take the time to learn chords in every inversion up and down the neck. It makes such a difference and will really free up your playing. You’ll be amazed how that preparation will pay off when you’re in the moment in a live show or session.

Probably most importantly is to remember that as soon as you think you’ve learned everything there is to know about the guitar you’ll immediately stop getting better. Chet Atkins would steal riffs and learn new things from fellow guitar players right up until he passed. That inquisitive spirit is what made him one the best players to ever touch the instrument.

What current projects are you working on?

I’m currently playing shows with The Wallflowers and working on records with Ivan Howard (The Rosebuds), ElenOwen, KS Rhoads and Sylvie Lewis – I also compose for film / tv and enjoy sound design and recording strange instruments.

And for a bonus Stanton has included a video a fan took of The Wallflowers playing at Riverfest in Little Rock – Stanton is using the Flint Trem & Reverb on the verses. 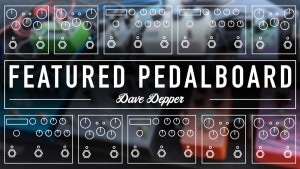