Killian Gavin grew up listening to The Beatles, Rolling Stones, Pink Floyd, Fleetwood Mac. From a young age he never wanted to do anything other than play in a band. His mum had him in piano lessons as a child, and once he hit about 12 years old he decided to learn guitar and never looked back. The first song he learned was Come As You Are by Nirvana. Killian is now enjoying the growing success of Boy & Bear.

I had the board custom built by my best mate who’s a builder and a guitarist too. I planned out what I wanted in terms of size and shape and he put it together.

Signal chain is as follows:
Guitar in
T1M mini buffer (under the board)
Then I go into the crocodile tail loop.
Loop 1 – Sweetsound Univibe
Loop 2 – Keeley compressor
Loop 3 – Klon
Loop 4 – Analogman KOT
Loop 5 – ’85 RAT
Loop 6 – EP booster
Loop 7 – Byoc tremolo
Volume pedal and bjfe buffer (not in a loop)
Then the Strymon Timeline (not in a loop)
Loop 8 – Strymon Ola
Then into Strymon blueSky (not in a loop)
Loop 9 and 10 control which amp or both amps are on. (’68 AC30 and ’66 Princeton Reverb). Can you share one or two of your favorite settings for your Strymon Ola?

My Ola I mainly use for vibrato. It sounds fantastic at every setting, but I have one favourite sound saved for live use, a fast speed and lower depth setting. It’s such a beautiful sound, I used it recording the guitars on ‘Real Estate’ and ‘Stranger’ from our latest record.

You are touring all over in 2014. How have your shows differed from when the band first formed in 2009 to now? How has that affected your pedalboard?

Like everything, you learn with time. I’ve found with trial and error what sounds work for me. Early on playing really small shows when we started out as band I just had a couple of boost pedals and a delay. As time went on and and my fascination with modulation surfaced and the board expanded. These days keeping a healthy signal chain is crucial. Using buffers were appropriate help both the feel and response of the amp to behave as if I were plugging directly into it.

Songwriting is so liquid, and always changing. Sometimes I prefer to write without the clutter of a pedalboard, and just get the part nailed first. Other times the sound of a certain effect can inspire me to write a part with a certain feel.

Traveling with gear can always be a little nerve-racking. Do you have any advice for traveling with your pedalboard?

I kinda think if you can’t bear the thought of it breaking, then perhaps don’t bring it on tour. We are doing about 200 shows this year. That’s a lot of travelling and flying so plenty of opportunities for gear to break. Our tech is fantastic at keeping everything safe and protected, and when stuff fails he’s there to fix it. I had a ’60s Gibson 355 snap it’s headstock recently which was pretty heartbreaking, but it happens.

Please share what is on the horizon for Boy & Bear.

We will be touring for about a year and a half on this record. Hopefully in early 2015 we will start writing some new ideas for a new record. That’s about it for now. 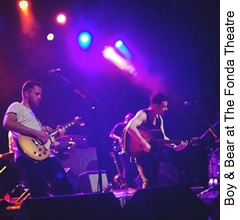