You can never laugh enough – at least that’s how we feel over at Strymon headquarters. So it was great when Linda Taylor reached out to us about her use of Strymon pedals on one of our favorite, truly funny shows. Linda, who shares some more insight below, has spent a lot of time expressing humor in her music as a part of Whose Line is it Anyway?. When not in a cyclone of laughs, Linda works with many artists like Tracy Chapman, Maia Sharp, Sheila E., Carlos Rios, Edwin McCain, Thelma Houston, just to name a few. Keep reading to find out about Linda’s pedalboard and more.

The picture is of what I would consider my “main” pedalboard. It changes all the time, but there are a few pedals that don’t get switched out.

The signal path starts at the Brad Sarno Steel Guitar Black Box, which is a tube buffer with variable impedance. The Peterson strobe tuner is connected via the Black Box (which has a tuner out). I hear a difference when the tuner is in the signal chain, so I keep it out (this is true on all my boards regardless of buffer – I always use a “tuner out” on the buffer).

From the Black Box, the signal goes into the Loop-Master 3-way bypass switcher. Out A goes to the Cry Baby Wah, B goes to the MXR Phase 90, and I leave C open for any pedal I want to drop into the chain, in this case the Origin Cali76. It’s convenient, especially at sessions, to have this C port so I can drop anything in. Otherwise I’m patching in pedals after the delays.

I’m rarely called for anything that doesn’t require a pristine clean sound. As a result, I get my OD and gain sounds from pedals. From the Loop-Master, the signal goes into the Sarno Earth Drive, to the Bogner Wessex, to the Rockbox Boiling Point. The Earth Drive and the Wessex get changed out and switched frequently, sometimes I’ll drop an Analog Man King Of Tone in there, it depends on the gig. The Boiling Point rarely gets changed out, and when I do, I usually regret it.

From the Boiling Point the signal goes into the Vertex Boost. I’m primarily using the Boost for its expression port, which connects to the Ernie Ball Volume Pedal. I always keep the Volume Pedal out of the chain, so the Vertex is great for that. It’s a terrific boost as well, but I tend to only use it with single coils.

From there the signal goes into the Demeter Tremulator, my favorite trem, and from there into the Strymon TimeLine and out to the El Capistan.

The El Cap functions as my general, “rhythm” delay and “solo” delay, while the TimeLine functions as more effected, long delays; more ambient sounds. Truthfully, I can probably do all delay duties with just the TimeLine, but the El Cap has a special “something.” I love this pedal.

I also have the Strymon BigSky, which I’m using mostly in the studio, so it’s not pictured on this board. The Midi clock on both the TimeLine and BigSky are essential, so I just keep a MIDI cable handy in the studio. Live, I’m just a tapping away! You have what I would consider a very unique job working with Whose Line is it Anyway?, an improv show. I’d love to hear more about how you prepare for and handle the improv nature of the music on the show?

I’ve been on Whose Line for about 17 years, maybe 18. Laura Hall and I count it by the age of her youngest daughter, so I’d have to check:>) It’s a very bizarre gig on a number of levels. There really isn’t much preparation we can do because we don’t know what is going to happen, although after so many years of not knowing what is going to happen, we are pretty familiar with what they like. So Laura and I get together before each round of shooting and go through iTunes and jam on a bunch of styles. I spend a lot of time programming drums that will work for a variety of genres (on Whose Line, we are pretty broad with our descriptions). We like to think about “orchestration” ahead of time: Should I be on bass, or banging faux timpani, or playing guitar, or what if they call “Broadway Musical” … that kind of thing. We are really trying to bring as much production and polish to the live music as possible. The key thing for us is reference – we must quickly convey the essence of whatever style we’re playing to Wayne and Jeff and Brad or whomever is singing. If it’s “jazz,” I’m gonna dink dink dink on a ride cymbal, if it’s “Prince,” I’m gonna start with the little 6/9 funk chord, that kind of thing. Immediate Reference! You also play with many musicians and recently were recording with a new artist. Can you share how the TimeLine Ice setting played a part in these recordings?

Boy, the TimeLine saved me on a recent session. The artist wanted guitar, but wanted it to be not quite guitar sounding, more ambient, drone-y, ephemeral, you know, not guitar. So I was just leaning on the Timeline all day long…think I went through every single factory preset. I kept coming back to the “Ice” preset, the way that sound sort of evolves and spins and sprinkles, boy I was a hero with that one. The artist REALLY liked it, so I think it made it to several tracks on the album….hey, if it ain’t broke…. I was tapping in and manually setting tempo all day, but from now on, I’ll just have them send me MIDI clock and run a cable, which is now what I do in my own studio. So much faster and accurate!

What is your go-to guitar and why?

Whatever the song needs, I don’t play favorites. Of course if there are several guitar parts I will always incorporate a single-coil track, a humbucker, then maybe my ’72 Thinline, or something unexpected like the $25 Decca my mother bought me when I was eight years old. I don’t want the mix engineer to have to work that hard, especially when I’m the mix engineer. So the guitar parts and the sounds should all stand on their own nicely. Live, it’s the same thing, whatever the gig needs. More and more I have a Strat and a 335 with me.

You have also played in many TV show house bands. Can you share a tip for someone that is looking to try to get their foot in the TV show door?

Oh, I guess the thing to remember is a TV show is very much like a casual – the music isn’t the point. It’s a cool punctuation, an accent, but it is not the point. Remembering that little mantra has saved me an ulcer or two…maybe I should stitch it on a pillow. Reading helps, but it’s all about being quick. It’s not what can you do, it’s what can you do NOW. Flexibility, open mindedness, preparation, be ready for anything. Maybe it’s like being a pinch-hitter. You sit there waiting, waiting, waiting, then when the camera swings your way you have to hit a home run. How’s that for mixing metaphors? Before Billy Norris could even get out of school to start the often long, arduous search for a job, he landed an amazing gig with 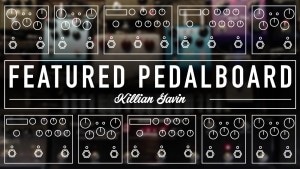