It was 2005, and I was in eighth grade. I had just picked up the guitar and was taking lessons, so my friend Richard thought I’d be interested in the guitar effects pedals his dad had been working on with his buddies – some tube-driven distortion and DSP-based multi-effects pedals with quirky names and crazy chassis. He brought one of the pedals to my house – a tube preamp/distortion unit – and it made my hackneyed renditions of “Voodoo Child” sound like I really knew what I was doing.  The pedal’s brand was Damage Control.  In fact, that’s me holding the guitar in the photo on the right.  The photo was taken at the Damage Control holiday party in 2006.  I never imagined that nearly ten years later I would be working for that company and the talented people who founded it. Damage Control was founded by Gregg Stock (analog engineer) and Lucian Tu (industrial designer) in 2004.  During this time, Gregg began crafting his own circuit board (shown to the right) incorporating high-voltage vacuum tubes and pre-and-post-distortion parametric EQ.  Once the board was designed, Pete Celi (DSP specialist), who Gregg had worked with at previous audio companies such as Alesis and Line 6, came to Gregg’s house to check out his latest invention.  “Pete brought his guitar over to my house on a Friday so he could play through what I’d built,” recalls Gregg, “on Saturday, he called me up and basically said, ‘I’m in.'”  Soon after, Dave Fruehling (embedded systems expert), another long-time friend and colleague of both Gregg’s and Pete’s, joined in and completed the Damage Control team. 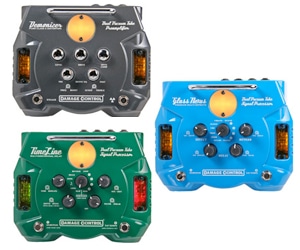 With Lucian Tu designing the signature chassis and Gregg, Dave, and Pete improving upon the initial specs, Damage Control rolled out four tube-driven distortion units within their first two years–first, Demonizer and Womanizer and, later, Liquid Blues and Solid Metal.  Meanwhile, Dave and Pete had delved into the world of Digital Signal Processing, designing some more intensive DSP-driven pedals also incorporating tubes known as TimeLine and Glass Nexus, which became the next additions to the Damage Control product line.  Although the pedals were praised by players and reviewers, sales did not quite take off as hoped, and the team temporarily found itself focusing more on consulting gigs than new Damage Control pedals.

The trio of Gregg, Pete, and Dave remained intact, however, and in its afforded time continued to work diligently on a brand new set of product designs. In 2009, the team decided it was time to recommit to building their own gear. Now-departed colleague Terry Burton, who had been working independently in their offices, had created the Strymon trademark. The team decided to make a fresh start and began using the Strymon name for this new line of Damage Control designs.  Following the development and successful release of blueSky, the team brought in Ethan Tufts (self-professed Marketing Nerd) to help promote the next generation of Strymon pedals.

Since 2009, Strymon, based in Westlake Village, CA, has launched a line of thirteen pedals covering everything from all-analog optical compression to DSP-driven modulation. From us, to your pedalboard, with love.

Thanks to the humbling support from an awesome fan base, Damage Control/Strymon remains inspired to design interesting, quality products that we ourselves would want to own.  When I asked what has been most rewarding about the Damage Control journey, Dave Freuhling answered, “Not working for the man. We’ve worked hard and are fortunate enough to have the freedom to not follow the rules. No matter what products Strymon cooks up in the future, we’ll maintain the spirit of where we started.”

Echoing Dave’s thoughts, ‘Marketing Nerd’ Ethan Tufts added, “We’re all about collaboration here. There is no one ‘mastermind’ or egocentric founder behind the design of our products. We decided early on that we don’t want to work for ‘the man,’ and we don’t want anyone here to feel that way, either.”  After helping out wherever I can here at Strymon for a little over a year now, I can confidently say that I don’t “work for the man,”  but, rather, with a group of talented friends. As we capped off our second Strymon Social this past September (again, to everybody in attendance, thank you so much for coming), I felt extremely proud to a be a part of a company with an enthusiastic fan base as well as an honorable mission – to invent tools that spark creativity, which Damage Control has now been doing for over a decade. As a matter of principle, I had to ask Pete if there was a single Damage Control/Strymon pedal that he could call his favorite. “Each project presents a new set of challenges and discoveries,” Pete answered, “but the development of the Damage Control TimeLine stands out as a special one. We were just starting out and we had no idea what we were headed for, but the excitement of the initial phase has an energy that is unique and I’ll always associate that with the Damage Control TimeLine. This of course was also the genesis of the Strymon TimeLine, allowing us to stretch the concept and take it to a new level.”

To me, Pete’s answer encapsulates what Damage Control has been about from the very beginning: pushing boundaries and pursuing creative goals, no matter how challenging, and building upon success through diligence and teamwork. I look forward to being a part of what comes next. Here’s to the next ten years. A couple weeks ago, we participated in a Reddit AMA “Ask Me Anything”, where Reddit users asked us questions about any topic. If you’re unfamiliar: