Kryz Reid of Third Eye Blind joins us to talk about his pedalboard and more. Third Eye Blind has been busy with their recently released album Dopamine, and were just in the studio working on their soon to be released We Are Drugs EP.

This is my “A” rig pedalboard which runs a rack of effects via MIDI. The brain of the board is an RJM Music Mastermind GT. I’m not a fan of running long cabling for audio, so all my effects and audio cabling sit right beside my amps. The pedalboard controls an RJM Music Effect Gizmo which brings different effects into the signal path depending on the patch enabled. The signal path is:

The custom A/B box splits to my “B” board which is a fly version of the “A” rig, and to a TC Electronics Ditto. I control my whammy and wah through Mission Engineering custom expression pedals.

Pictured below is my “B” board, which is a fly version of my “A” rig. I use it in the studio, and this photo is from a studio we were recording in Brooklyn, NY earlier this year. The guitar beside the board is my number one Les Paul, BB-8. You joined Third Eye Blind in 2010. How did that relationship start?

I played in a band in Los Angeles with our drummer Brad. I met him through our mutual friend Soren Gray, a San Francisco singer-songwriter I’d met in Dublin. I used to fly over from Dublin and sleep on Soren’s floor and we’d hang out and make music. Brad was the drummer in Soren’s band. He called me up in January 2010 and gave me first dibs on the Third Eye gig. My first reaction was: Wow! Awesome, I get to play with Brad all the time. I’d never actually heard any Third Eye Blind music at that time. They weren’t big in Ireland, or at least they had never popped up on my radar at all.

Please tell us about the new Third Eye Blind album and some highlights of recording the new album.

The album Dopamine was recorded all over the shop. We started with demos in San Francisco in Stephan’s studio. We were touring constantly, so we’d work different studios into our touring schedule. We recorded in Oklahoma, SF, Los Angeles, London, all over. There were a bunch of highlights for me, from writing songs on tour in Hawaii to recording one-take live sessions in Los Angeles with Jason Lader.

For those that are working their way up to a large venue, could you share what it is like to play venues like Jones Beach Theater or Irvine Meadows that have capacities of 15,000+?

I’m not sure what I could share in terms of how to get there, but the experience of playing any venue for me really boils down to the connection we feel as a band on stage. It’s like swimming, you know? Once you can swim, you can swim. It doesn’t matter if you’re in six feet of water or sixty. That’s kinda what’s it’s like for us on stage. Come see Third Eye in a 150-capacity club, or in front of 15,000 people, we play every show like that. What are some reasons that Jimi Hendrix has been a huge influence on your guitar playing?

Well, I came to Jimi like I’m sure a lot of people did, through Prince. Prince is the entire reason I ever got into playing guitar. So for me, Jimi was like the prequel. I learned everything from Prince, and seeing Jimi just opened my eyes the same way I’m guessing Jimi opened Prince’s eyes. It’s gonna sound odd, but when I first listened to Jimi, Page, Frusciante–I felt I could do that. With Prince, it was always like a bizarre magic trick.

Watching guitar players play is something otherworldly to me. It’s funny, I used to never work out any guitar solos or other guitarists parts in songs ya know? Like I didn’t want to know how the magic trick worked. Ever since Prince died I feel the cloak has lifted on that. That’s why you’ll hear me playing part of the Purple Rain solo in “Something in You” live now.

What guitars are you touring with? Why did you choose those?

My guitar boat consists of a bunch of Les Pauls, a doubleneck SG, and a Telecaster. All my guitars are named after Star Wars characters. My number one Les Paul is a ’58 Reissue R8 called BB-8. Number two is a ’79 The Paul called Vader which I bought in Dublin actually. I have another The Paul called Anakin which is a ’78. I’ve a Traditional, an R0, a doubleneck SG (named Tatooine) and a ’66 Custom Telecaster which is Stephan’s. I bring a vault of about eight guitars because we use a bunch of different tunings live. My backstage jam/warm-up guitar is a ’68 Fender Custom Shop RI…called Death Star.

Bonus picture of Kryz Reid’s amplifier. It is a custom shop Fender Tone-Master from ’91 that Kryz had Simone Legno of Tokidoki do custom artwork on and then had it wrapped by Fender’s custom shop tolex guy. 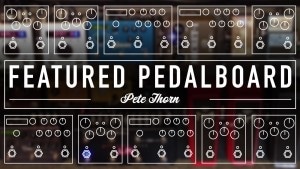